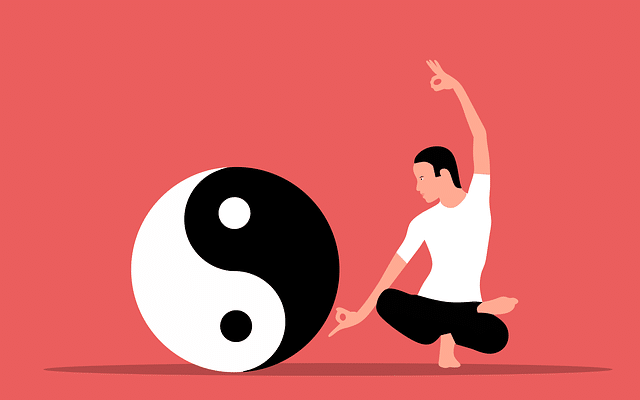 What are the Yin and Yang?

The Yin and Yang philosophy originated in ancient China. The symbol for it is a circle with one half being fully black with a dot of white in it, and the other half fully white with a black dot in it. There are many theories as to what it symbolises, but the main theory is about balance. How the black and the white complement each other and somehow need each other to survive.

The symbol conveys beautifully how for light to appear there must be a level of darkness and vice versa for the darkness. It portrays how when you have both, there is a beautiful balance. It’s also trying to show how important balance is in every aspect of life, be it physical or mental. For example, if someone is relaxing too much, or working too much, the other activity is needed to balance the persons’ productivity.

What is Yin Yoga?

The Yin part of the Yin and Yang is all about softness, calm, and clarity. It’s the white colour within the symbol. Therefore, when it comes to yoga, Yin yoga is calming and a very soft practice. For those who have never tried Yin yoga, they find it difficult because it can be quite slow.

The practice is supposed to be a restorative one, where slow movements are made in-between transitions. Usually poses are held for 3-5 minutes and only about 6 poses are done per class. Yin yoga aims to be more meditative and is, therefore, a lot quieter to allow the person to sit with their own thoughts and breath.

It’s usually prescribed or advised that people who generally have a very fast-paced life and are constantly busy do this kind of practice to slow down. It offers time to really reflect and go inwards, which most busy people don’t have time to do.

What is Yang Yoga?

Yang yoga on the other hand is therefore the exact opposite of Yin Yoga. This is the kind of yoga that is fast-paced, dynamic, and usually entails building heat in the body. There are many different styles of yoga that can be categorised as Yang yoga such as vinyasa, ashtanga, and power yoga.

Vinyasa is the most common form of yoga found in the world now and many refer to it as normal yoga. It’s clear that the world has become fast-paced and often rewards productivity. This is why Yang yoga is more popular because it makes people feel like they’re getting things done.

Yang yoga would be a perfect form of yoga for those who are usually very calm and always taking things slow. It offers an alternative to the easy-going lifestyle that some have and gives them a space to speed up and get heated without being in a stressful environment. Yang yoga is all about being active and getting the blood flowing in a healthy and safe way.

What is Yin and Yang Yoga Together?

Yin and Yang yoga is when the two practices are fused together into one dynamic class. It’s also sometimes referred to as Yinyasa when it’s Yin and Vinyasa specifically combined. Both forms of the practice will be found in one class with half being done at the beginning and the other half at the end.

With most Yin and Yang classes, the Yin portion will go first and the Vinyasa or other style will go after. Some say this makes them too calm to practice a strong and active flow afterward and those people will enjoy the flow the other way around. It can go either way, depending on the person, the class, and the instructor.

When the vinyasa flow goes first in the class and the Yin portion goes after, it makes it easier to relax and focus on your breath because you’re not anxiously waiting for a fast-paced flow. It also allows you to go deeper into Yin asanas (poses) because the body will already be warmed up from a vinyasa flow.

Another form of Yin and Yang Yoga

Yin and Yang yoga doesn’t always have to be the two practices combined into one. Sometimes it can also be doing an active and fast flow whilst maintaining a Yin mindset and moving with intention and ease. This allows you to do Yin and Yang together whilst doing a seemingly predominantly Yang yoga flow.

The same can go for doing a Yin flow, it can be both combined whilst still being a predominantly slow flow. You can be aware of the dynamic movements within Yin whilst moving slowly between poses. Yin and Yang present themselves in both forms of yoga and intertwine because the one cannot be without the other.

The whole belief of Yin and Yang is that the one cannot survive without the other, which is why for a healthy balance there must be both. If one is being continuously done without the other, there will be a major imbalance within. It’s not only about the balance of the body but also about finding that spiritual balance.

One offers heavy muscle flow, whilst the other offers a more spiritual flow. Both the physical and mental are important in yoga and philosophy, which is why it works so well together. Doing Yin and Yang yoga improves your overall wellbeing by ensuring you’re not overworked, are remaining calm, staying physically active, and healing your body all at once.