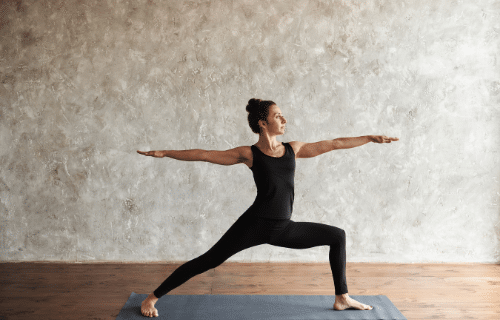 Warrior 2 is a standing pose that’s found in yoga. It’s one of the most common poses found in a yoga class and makes up the warrior series. Like most of the warrior poses, it’s a grounding pose. Warrior 2 pose is one that requires full-body engagement and challenges beginners and advanced students.

The challenge in the pose helps to make a person feel more powerful and rooted down in the earth. This primary asana (pose) is seen in many yoga flows because of how easy it is to use as a transition into other poses, and because of the many benefits received from doing the pose.

The basics of warrior 2 pose

Warrior 2 is known as Virabhadrasana II in Sanskrit. The pose targets many areas in the body and requires full-body engagement to be held. The main target of the pose is the hips, thighs, and shoulders. It takes a lot of strength and engagement in these areas to hold the pose.

The benefits of practicing warrior 2

Warrior 2 pose has many benefits, one of the biggest benefits being that it opens the hips up. This allows the body to go deeper into hip stretching poses and increases flexibility in the area. The pose requires engagement from the thighs, which builds muscle in the thigh and allows the thigh to do more strenuous work.

The arms are also engaged in warrior 2 to keep them in one long line and raised. This strengthens the arms and creates the feeling of being powerful. Warrior 2 is a wonderful pose to use when feeling down or self-conscious because of how confident it can make a person feel. The pose is strengthening and grounding all at once.

How to do warrior 2 pose

One of the biggest mistakes that people make when doing warrior 2 is leaning too far forward over their front leg. This causes more pressure in the front thigh and creates the need for more engagement. The weight of the body should be distributed evenly throughout both legs.

Another mistake that people make when doing warrior 2 is arching their spine and doing a slight backbend. For some people arching the spine can make the pose feel easier to hold, but it doesn’t make it easier to hold. The spine should be straight and lengthened all the way to the crown of the head.

A great tip for those who are trying the pose out for the first time, begin with the hands on the hips. There’s no need to raise the arms the first few times doing the pose. There is a lot that goes into warrior 2 pose, by allowing the arms to rest, the pose can be broken down easier.

Another tip for beginners is to begin in a standing position and walk the legs out into the warrior 2 pose. This can make it easier to break down each step of the pose. Remember to take it slowly and hold for a few moments at a time until you feel strong enough to hold for a longer period.

If someone is injured or is feeling pain in the area of their hips and legs, then they should be avoiding warrior 2 pose. If it doesn’t feel comfortable in the pose, slowly back off from it and try something gentler. Always listen to your body and never push past the point of pain. Consult a doctor or physician before doing any physical exercise or trying out any yoga pose.

An easier variation of warrior 2 would be to do another warrior pose like warrior 1. This is where the body is facing forward, and the back foot is at a 45-degree angle. Both arms are raised up and overhead and the front knee is stacked over the front ankle. This is similar to warrior 2 except it doesn’t open the hips as much.

Another variation of warrior 2 would be extended side angle. This is whereby the lower body remains in the warrior 2 shape, but the front elbow is placed on the front thigh and the back arm reaches up and over the head. This is a great side-body stretch that can be done in warrior 2.