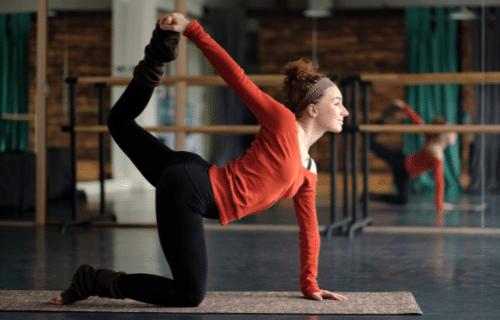 Tiger pose is a back bending and kneeling pose that’s found in yoga. It’s often seen near the beginning or at the end of a class. It’s a useful pose for transitioning between all fours and a yoga sequence. It’s also a good pose to use when trying to test or improve on balance.

It’s a gentle pose in nature but can also be fiery as it requires some core work and the glutes to be engaged. The shape of the pose looks like a tiger that has just woken up in the morning and is stretching. The raised leg in the pose is supposed to be the tail of the tiger.

The basics of tiger pose

Tiger pose is known as Vyaghrasana in Sanskrit, the Vyaghra in the name means tiger in English. The pose lives up to its name because it does require some strength to hold. It targets the glutes, core, wrists, and hips. It mainly targets the area of the spine as it is a subtle backbend.

Even though the pose requires some strength from the arms and the core, it is still a fairly easy pose to hold and get into. This makes it a beginner-friendly pose. Some people struggle to hold the pose when they first try it, but once they understand the elements that make the pose, it gets easier to hold.

The benefits of practicing tiger pose

Tiger pose requires an arch in the back, which stretches the spine and opens the shoulders. This can also help relieve stress and calm the nerves of anyone who is practicing the pose. To hold the pose, a person has to engage areas like the glutes and core, which improves overall balance. It also teaches a person what to do for more difficult balancing poses.

How to do tiger pose

For those who are trying out tiger pose for the first time, it can be helpful to use a blanket. This pose can be sore on the knees and for those who aren’t used to it, padding the knees with a blanket can really help with that. Doing the pose for a small amount of time is also helpful.

If someone is injured in the area of their knee, hip, wrist, or spine then they shouldn’t be doing tiger pose. If someone is feeling pain in any of these areas or whilst they are practicing the pose, then they should avoid doing it. Always listen to your body and never push past the point of pain. If something hurts, slowly back off from it and try a gentler pose. Consult a doctor or physician before doing any physical exercise or trying any yoga pose.

A variation of tiger pose, which many people find easier, is cat cow. This is a sequence pose whereby the person arches and rounds their spine in a tabletop position. This pose is also good for the spine and requires a strong tabletop foundation.

Another variation of tiger pose is whereby a person comes into tiger and then lifts the opposite hand of the foot raised and holds onto the foot with it. This requires more balance and focus. It’s a harder tiger pose variation and requires more of a backbend. It also has the same benefits as tiger pose.