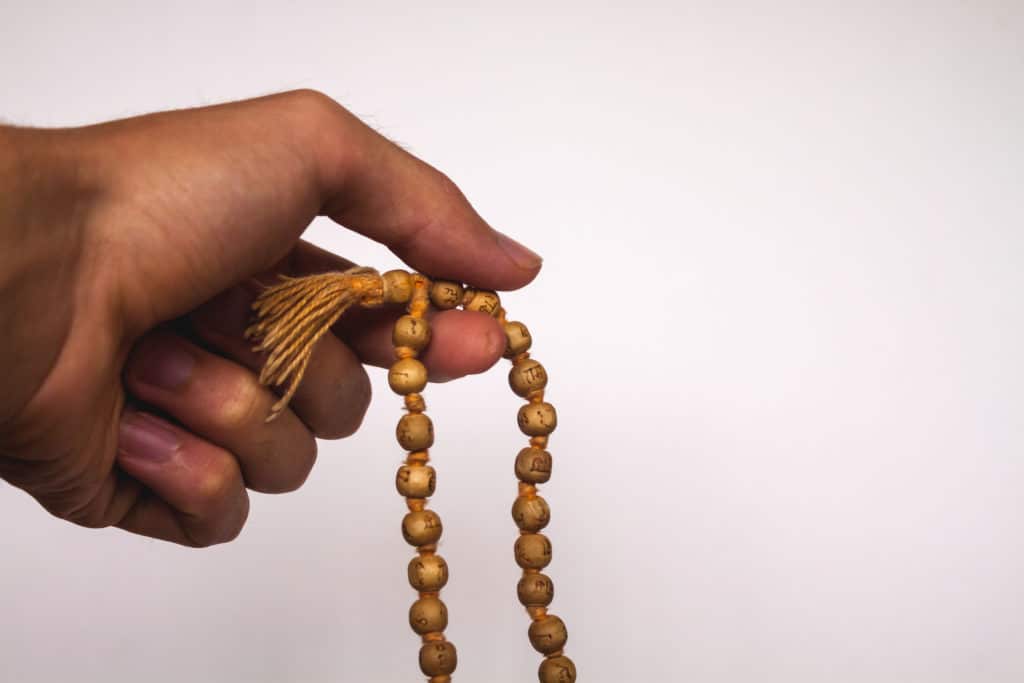 Tulsi beads are made from the Ocimum sanctum plant, commonly known as the holy basil plant, or Tulsi plant. This article discusses the mythology behind the spiritual importance of the Tulsi plant. Tulsi beads, when worn in the form of a necklace or a bracelet, provides multiple physical and spiritual benefits to the wearer especially by devotees of Lord Vishnu or Lord Krishna. Read on to learn more!

Tulsi beads are made by drying the roots, stem and branches of the Tulsi plant. The dried wood is cut into small spheres or in the form of narrow cylindrical shapes either by a machine or manually. These beads are then drilled in their centre and woven together by a silk thread. Each bead is about 8 mm with the entire length of the mala being 22 inches. In India, several retailers have specialized in the business of making tulsi beads. The number of tulsi beads in a Tulsi “mala” or rosary is 108 plus an extra bead. The tulsi mala is either worn as a necklace or as a bracelet, or it is used as a “japamala” or a “rosary” to chant sacred hymns popularly known as “mantras”. Alternatively, you can chant “Hare Rama, Hare Krishna” while wearing the tulsi bead rosary. To check the purity of tulsi beads, the mala is kept soaked in water for about 30 minutes. If its color does not change, it is pure in quality. In India, “vaishnavis” or devotees of Lord Vishnu as a custom wear tulsi bead necklace or bracelet. By wearing tulsi beads, one becomes close to Lord Krishna, and it signifies their surrender to the Lord. The first bead, which is slightly bigger in size than the rest of the beads, is the starting point of the chants. The vibration of the mantras helps in healing the energy bodies. Chanting mantras, using the tulsi beads while keeping the eyes closed also helps to calm oneself down and promotes concentration. If a tulsi bead mala is made up of 54 beads, to complete the 108 chants, one does not cross over the starting bead, rather a reverse count is taken, from the 54th bead, a reverse cycle is followed. Thus, two cycles of 54 beads sum up to the magical number 108. There is an exciting logic behind the number 108. Though there are many theories around the speciality of this number, we will discuss a few reasons below.

The seemingly humble tulsi beads give the wearer a variety of benefits as per the Hindu scriptures. 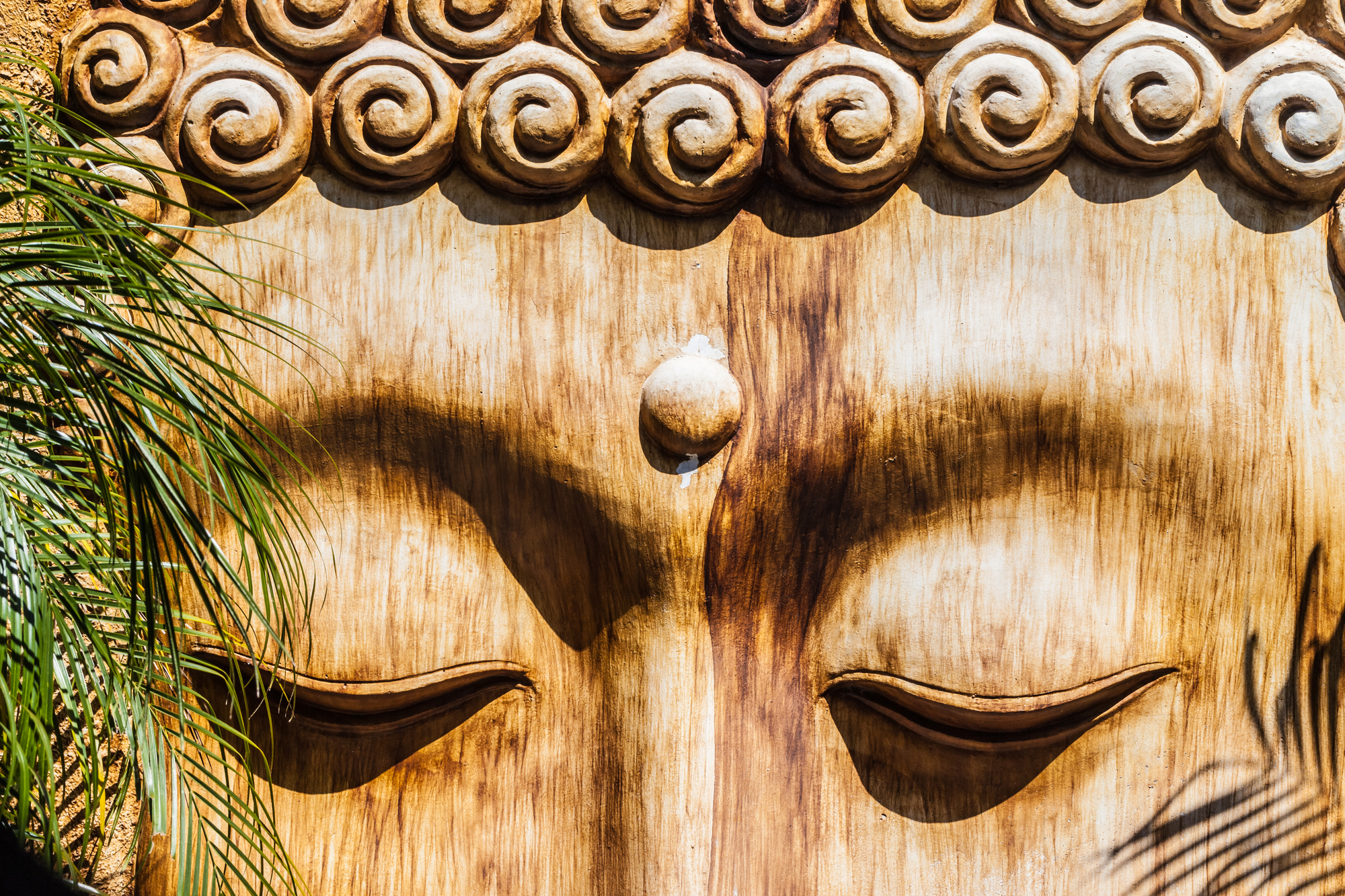 detail of a wooden zen sculpture in a zen garden

As per the Bhagvad Gita, anybody can wear tulsi beads mala. There are no restrictions to who can wear it and who cannot. However, as with everything that helps us to reap benefits, care should be taken while wearing tulsi beads too. When a doctor prescribes medicine for an ailment, doesn’t he advise the patient to abstain from certain indulgences? In the same way, while wearing a tulsi mala or rosary, to reap maximum benefits, one has to keep in mind certain aspects of their lives.

A person wearing tulsi beads must:

Tulsi beads are considered spiritual because the tulsi plant is worshipped in India.

The reason why Tulsi is considered sacred by Hindus can be gauged by a mythological story. As per the Hindu scriptures, Tulsi was initially known as Vrinda and was a pious lady and an earnest worshipper of Lord Vishnu. She was married to the king of demons, named Jalandar. Wars between devtas (holy beings) and daanavs (devils) were mentioned in the holy scriptures. Because of her devotion, her husband, Jalandar acquired great powers and was undefeatable, so much so that, even Lord Shiva could not defeat him. A part of his strength came from the untainted character of Vrinda and her righteousness. It is said that Lord Shiva approached Lord Vishnu to defeat Jalandar. A different strategy was applied by Lord Vishnu. He tricked Vrinda into believing that he was Jalandar. Coming in close contact with a man other than her husband, destroyed the chastity of Vrinda. Hence, Jalandar lost his powers and got defeated and ultimately killed. This instilled wrath in Vrinda, and she cursed Lord Vishnu, that he would get separated from his wife in the same way as she was separated from Jalandar. She also cursed that Lord Vishnu would take the form of a black stone called Shaligram. She, in turn, took the form of the Tulsi tree. Lord Vishnu upon realizing his mistake, assured Tulsi that he would get married to her. Thus, Tulsi became a Goddess after getting married to Lord Vishnu. An interesting point to be noted here is, Lord Krishna is said to be an “avatar” or form of Lord Vishnu. Hence while chanting mantras, one can chant “Hare Rama, Hare Krishna” as discussed earlier. In India, in houses where that have a front courtyard house, a Tulsi plant is placed near the main entrance of the house in the eastern direction. In flats, it is kept in a pot either in the window or in the balcony. Every morning, Indian women, usually the married lady of the house, offer water to the Tulsi plant, which is kept in a decorated pot or a structure especially made for growing the tulsi plant. The tulsi tree is supposed to protect the house from negative energies. People ensure that the tulsi plant does not get dried up due to lack of proper care.

Thus, Tulsi beads hold a significant spiritual value in them and are very beneficial to those who are seeking spiritual progress in life. They have a plethora of benefits about them, and the wearer is blessed immensely. The price of a tulsi mala varies from Rs 10 to Rs 700 in India.

Thus though not a very expensive piece of jewellery, the positive effects it can provide the wearer are priceless, to say the least.