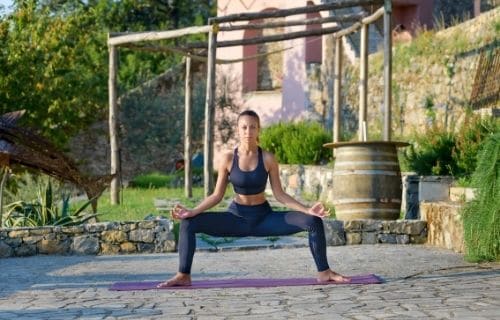 Squat pose is in between a standing balance and a hip opening pose. There are many variations of a squat all forms of exercise use, but the yogic squat is quite different. The squat is very deep and focuses mainly on the hips and the inner thighs. The term for a squat in yoga is known as yogi squat or garland pose.

Yogi squat offers a variation of how to sit when near the floor in a way that’s better for the body than the regular kind of sitting. This pose is used to combat what sitting on chairs or the floor does to the ankles, spine, and hips. It’s a healthier way of sitting that was used in the days of hunter-gathering when they didn’t have chairs.

The basics of squat pose

Yogi squat focuses on opening the hips and stretching the inner thighs. It’s also a very deep ankle stretch that a lot of people aren’t used to and struggle with. It’s sometimes used primarily to target the ankles although there are variations of the pose for those who struggle with ankle mobility.

This pose can be done by anyone because there are variations for all levels, which makes it a beginner-friendly pose. Yogi squat, also known as Malasana in Sanskrit, is a wonderful pose to use when cooling down or to transition to more difficult poses like crow. It’s commonly used as both a cool down and a transitional pose.

The benefits of practicing squat pose

Yogi squat is one of the best poses to use to mobilise the ankles. There aren’t many poses that target the ankles in yoga and this one is one of the few. It’s important to keep the ankles healthy as they’re used for almost everything. Yogi squat ensures the ankles are strengthened and stretched for any pose.

It’s also a deep hip opening pose that increases flexibility and range of motion in the hip. This is helpful for building the flexibility for more advanced poses like side splits or a deeper butterfly pose. It keeps the spine, ankles, and hips healthy whilst combatting the tightness that you can get from sitting in chairs all the time.

How to do squat pose

The biggest mistake people make is having their hips above their knees and not lowering into the pose enough. The hips need to be below the knees and the glutes must almost be sitting on the ground. It’s not a squat unless the bum is almost touching the floor so that the legs are squatting down.

Another thing that people do is go deep into the pose with their feet flat on the ground and hold it whilst in pain. There’s never any need to put the body in a painful and uncomfortable position. The benefits of the pose are still felt if the heels are lifted off of the ground. No pain no gain mentality doesn’t apply for yoga, it should always feel good.

If trying this pose for the first time, then do it with the feet closer together before squatting down. This way the knees don’t have to splay out so much, which makes it not too deep of a hip opener. It also makes it easier to come more onto the toes and lift the heels if the ankles aren’t mobile enough yet to stay on the floor. Move slowly into the pose and listen to how your body responds to the pose. Never force the body into a pose and always be gentle with it.

Yogi squat is an intense pose for the body and shouldn’t be done by anyone who has pain in their thighs, ankles, feet, hips, or spine. Rather do a gentler and more restorative pose. If someone has injured their spine, ankles, or hips then they should also avoid this pose and consult a doctor or physician before moving into anything. Always consult a doctor or physician before going into any kind of movement to ensure your body is prepared for it.

To make yogi squat easier, it simply needs to be done with the feet closer in together. This variation is less of a hip opening pose and focuses more on stretching the ankles and the spine. It also leaves more room for the heels to lift off and make balancing easier if this happens. You could also place a block under the butt for more support.

A harder version of this pose is when the feet are closer together and the elbows are splaying the knees out very far but then removing the elbows and maintaining the distance between the knees. This is still a deep hip opener, but it also strengthens the glutes and inner thighs as they need to be engaged to keep the knees apart.References: