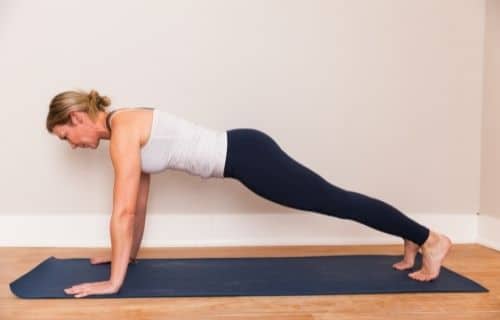 Plank pose is a very common pose that is found in various exercise routines and workouts. The yoga version is still a plank, but it’s done a little bit differently. The yogic plank pose has more focus on the breath and finding stability rather than other planks that focus on only building strength.

The yoga version of plank pose is an arm balancing pose, which means the majority of the time it’s done in classes to target the arms and not only the core. Although, plank pose is a full body activation pose that requires engagement in many muscles and full body awareness to focus.

The basics of plank pose

Plank pose, which is known in Sanskrit as Phalakasana or Kumbhakasana, is an extremely difficult pose. It’s an arm balance that is used the most in yoga flows because people are so familiar with it. Even though it’s used in almost all classes this pose is still an intermediate pose because of how challenging it is.

For beginner classes, plank pose is never held for a long time and therefore the full strength of the pose isn’t required. The strength required for this pose comes from the arms, abdominals, pectorals, and even the glutes. When all of these muscles are engaged then the pose can be held in perfect alignment.

The benefits of practicing plank pose

A straight spine is achieved by engaging the arms, core, and glutes in plank pose. This improves the overall posture and spinal health. To hold the pose the wrists go into deep flexion, which strengthens the wrists. It also prepares the body for harder arm balances like crow or firefly pose by strengthening the correct muscles needed to hold those poses.

How to do plank pose

The biggest mistake that people do in plank pose is that they let their chest sink downwards, which puts a lot of pressure on the shoulders. It can be painful, and it also doesn’t build any strength. That’s why rounding the upper back slightly makes sure that the person is pushing out through the hands and not dumping weight into the shoulders.

Another thing that people do in plank pose is that they forget to engage their hands. It’s an arm balancing pose, which means the fingers and hands contribute a lot to the stability of the pose. They need to be engaged to hold the pose and find stillness.

Plank pose is not an easy pose for beginners, and it’s not recommended for a beginner to practice this pose for long periods. When first doing the pose, practice the shape of it. It can be done lying down or in a kneeling variation. This is a good way to ensure you have all of the elements needed to hold the pose.

When actually going into plank pose, it doesn’t need to be held for a long time. Start with holding it for 5 seconds and slowly, over time, build up the strength to hold it for a longer period. Strength for this pose can be built by doing plank variations and holding downward facing dog.

If someone has any shoulder, neck, arm, or wrist injury then they should avoid this pose. Similarly, if someone is experiencing pain in those areas then they also shouldn’t be practicing plank pose. If someone experiences pain whilst in the pose, then they should back off a bit. No pain should be felt in this pose. Always consult a doctor or physician before doing any physical exercise or movement, or if you’re injured and unsure whether you can practice yet.

To make this pose easier, go into plank pose but then lower the knees directly downwards from where they were. The knees shouldn’t go slightly forwards or backward, it should be right under where they were. The wrists will still be stacked under the shoulders and the core will still need to be engaged. If no core engagement is felt in this pose, then a regular plank pose is what should be practiced.

To make plank pose harder, simply lift one leg off the ground so that it’s in line with the upper body. This adds load to plank pose and makes it more challenging. To make this variation even more challenging, the opposite arm to the leg can lift up as well for awkward plank. Another variation of plank is side plank, where all the weight is on one arm. The arms are stacked over each other and the feet are also stacked on top of each other. This variation is more arm strengthening than core strengthening.