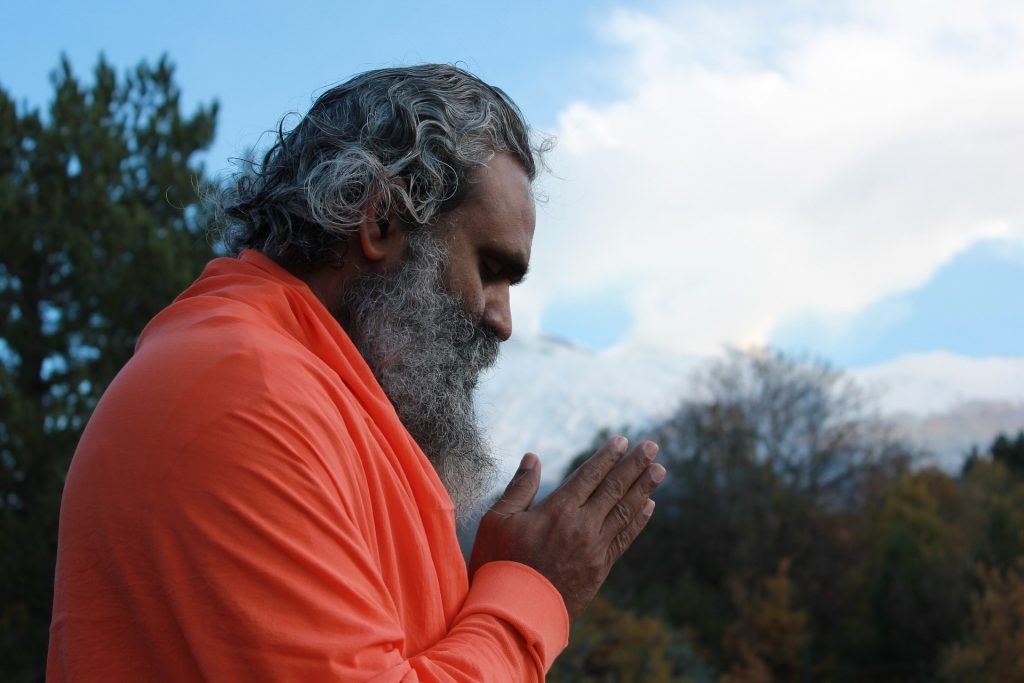 Especially if you’re new to yoga, you are probably in the process of learning how to twist your body into positions you never thought you’d achieve, paying more attention to your breathing than you ever have, and trying to remember the names of the eccentric poses.

If you’re learning from the right sources, you’re probably wondering about the typical greeting or salutation they say: Namaste. What does that even mean? Where did it come from? What language is it?

The first time I heard it, it definitely gave off a peaceful vibe and I could tell by the tone of the instructor’s voice that it was a natural and calming way to positively close the practice. I might have even repeated it back without understanding the full meaning, but it just felt right.

Little did I know the vast history and sacred meaning behind this one word. I repeated it back to my instructor along with the other yogis and while it was implied as a greeting and salutation, there was much for me to learn as a beginner yogi.

Namaste is Sanskrit for, “I bow to you”. It can be used as a greeting or salutation and acts as a notion of respect and gratitude. It is often associated with “Om” using the Namaste symbol.

When making the Namaste gesture, you will place your palms together and raise them to your heart chakra, one of the seven energy centers of your body. Your thumbs will point towards your sternum, you will close your eyes, and bow.

Another option for the namaste gesture is to raise your hands together like before up to your third eye, or forehead, while bowing your head with your eyes closed.

It is believed that bringing the hands to the heart chakra increases the love of the Divine. Bowing and closing your eyes allow you to fully surrender to that love and heightens the meditative feeling.

Often, the Namaste gesture is done without words in countries such as India and Nepal and it carries same meaning.

The Sanskrit symbol has many parts to it that mean something different. You may recognize it from bumper stickers, t-shirts, or magazines. It’s becoming a popular symbol, but what does it actually mean? The Om (aum) symbol may look complicated right now but after breaking it down, you will feel confident in explaining it to others.

First, look at it like the letter three with a hook coming off of it that has a hat. That’s the best way to view it so it doesn’t look like a bunch of curves and lines.

The top point where the three begins stands for the unconscious state. This stands for when one is asleep with no dreams and without any desires at the present time.

The waking state is where the three ends. This represents the five senses of someone who is waking and enters a state of consciousness.

The bottom curve of the hook symbolizes the dream state. This is when sleep turns into dreams and the dreamer experiences events from behind their closed eyes.

The right tip of the curved piece of the hat symbolizes illusion. Illusion is said to be what blocks one from the ultimate state of spirituality and experiencing pure bliss.

The dot at the top of the symbol signifies the absolute state. As the fourth state of consciousness, it is a quiet and blissful state and the goal of spirituality.

Dr. Acharya Shree Yogeesh speaks deeply about the meaning of Om and his perspective of its meaning in the Hindu culture.

If you’ve ever participated in a yoga class where the instructor ended the class in Om, you will understand the powerful feeling as everyone joins in with a long “Om”. The ringing and harmony of everyone’s voices together resonates an indescribable feeling of peace. The appropriation of the Om symbol has become more common today. By taking this sacred symbol from a different culture than our own and “appropriate” it for our own use, one may attempt to make it part of their own daily lives.

Many in the American culture, for example, aren’t a part of the Hindu faith where the Om symbol is much more than a symbol used in yoga. It is sacred to their culture and religion. All in all, you may want to think twice about having an Om tattoo permanently placed on your body.

Let’s dive a little bit deeper into the meaning of Namaste. With the literal meaning of, “I bow to you,” it serves as an acknowledgment of the Divine energy within everyone in our heart chakra.

You may hear an instructor say, “Namaskar,” which translates to “I pay my salutations”. Namaskar is common in some cultures for addressing multiple people while Namaste is addressing one person for a more divine or spiritual greeting.

Namaskar is also considered the simplest form of yoga, that is, by simply placing your palms and fingers together. This gesture brings peace and unity within yourself and others. Namaskar brings everyone into union, the literal translation of yoga being “union”.

Saying “Namaste” holds such a sacred meaning to some yogis in India so much so that it is not even uttered; the gesture is enough. Particularly in Western culture, it is widely accepted as a salutation or greeting to indicate how we are all equal.

How Sanskrit Words Became a Part of English

As you may know, many languages have emerged from borrowing pieces of other languages and evolving over time. English is certainly no exception. As mentioned earlier, Namaste is from Sanskrit. Other Sanskrit words we use in English include “karma” and “nirvana”. Americans discovered “Namaste” when reading about the independence of India during the 20th century.

The Merriam-Webster Dictionary reports first including “Namaskar” into their dictionary in the 1950’s defined as: “a respectful Indian mode of address or salutation performed by joining the palms, including the head, and saying ‘namaskar’.”

In the 18th Century, the English and the Indians began to interact. Western scholars began to study Sanskrit and began to recognize the relationships and commonalities it shared with other languages. The grammar and word structure suggested interconnectedness.

The parent language of Sanskrit, Latin, and the Germanic languages is believed to be Proto-Indo European. Although it is a lost language, characteristics of it are shared among the related languages that stemmed from it, such as English and Sanskrit.

With a further look into the linguistics of Sanskrit and how words have been adopted and borrowed from the derivative languages of Proto-Indo European, it becomes more clear on how words like Namaste have become a part of several different languages and cultures.

Traditional Greetings and the Beginning of Namaste

In Western culture the proper greeting is usually the handshake, as you might have guessed. Sometimes we hug and sometimes, especially in certain European countries, we might kiss on both cheeks. For Hindus, as many of you yogis are already aware, the standard greeting is Namaste. In much of Indian culture, the Namaste gesture will be found plastered all over brochures and other items with a visual aspect such as calendars and posters.

Namaste originated in Hinduism and like Buddhism, the lower the bow, the higher degree of respect is communicated. Raising your hands to your third eye is also a way to show deeper respect.

In India, each finger is representative of a different element that comes together when the hands join in the Namaste gesture. The tips of the fingers are recognized as major energy points that are activated when they touch as we join the palms of our hands together.

The pinky represents dullness, the ring finger is activity, the middle finger is refinement, the index finger is the individual soul, and the thumb is the ultimate soul. The energy of each representation of our fingers flows through us as they touch in Namaste.

There are a couple different religions that hold Namaste as sacred and Buddhism is one example. To many of these religions, the meaning of Namaste goes beyond just a greeting like we may use in our personal yoga practice.

In Buddhism, Namaste is a way to show deep respect and good will to those whom you say it to. The bowing element that is paired with saying it is a symbol of overcoming pride, a major focus of Buddhism.

The bow with your hands together raised to the third eye in Buddhism is a very common gesture, and while some outside of Buddhism may view it as a gesture of devotion, it actually acts as a sign of great respect. The bow is considered a cure from ego.

As previously mentioned, the depth of the bow that accompanies the Namaste gesture in Buddhism signals the degree of respect. For example, for a Buddha statue Buddhists may bow down on the ground while resting on their knees and repeat the motion several times.

In some parts of Asia, one may bow to the floor when greeting parents and in-laws for events such as a wedding or death anniversary ceremony.

Overall, Namaste plays a significant role in Buddhism and most importantly holds the meaning of letting go of your ego to show respect towards others.

Namaste, Yoga, and Other Religions

Now that we know that Namaste originated in India and is very relevant in the Hindu culture as well as in Buddhism, is there room for almost anyone to adopt it? While yoga and its roots aim for respect and unity with all, other religions may find their place as well.

Brooke Boon, the founder of Holy Yoga, discusses the meaning of Namaste as it may pertain to those of the Christian faith. She provides valuable insight on how those who practice Christianity can relate to words and traditions in yoga, such as Namaste.

She explains how Namaste can be viewed as “respecting who God is creating everyone to be. So bowing to the light in someone else is the light of Christ, honoring that they are created in the image of the Lord…”

Some Christians may be confused by or feel uncomfortable using a word like Namaste in their daily yoga practice, as it originates from a religion different from their own. Those practicing a religion that is not related to Hindu may feel the same.

Sandhguru Jaggi Vasudev, an Indian yogi, mystic, poet, and New York Times bestselling author, addresses the concern of yoga and its traditions being against anyone’s religion. He compares it to cars: “If you do not know how to use it, it doesn’t work for you.”

“Yoga is a technology,” Sandhguru states. “What you believe or disbelieve, this car doesn’t care. It only cares whether you know this mechanism and can you drive it or not.” He urges the audience that yoga can be for anyone, as long as you’re willing to learn.

I know that the next time I say Namaste, I will feel its meaning stronger than I ever have. I will think about everyone in the room with me, recognizing and respecting the divine energy within every single yogi. I will think of the journey it has taken in order to pass through my lips.

The Namaste gesture, namaste symbol, and the practice of yoga all join us together with peace, respect, and recognizing divine energy within those around us.

Namaste is related to so many cultures, religions, and languages. It is adopted and shared and utilized by so many people in so many different contexts and brings so many people together. It is one of the most ultimate forms of unity.

I hope you will continue practicing the fundamentals of yoga and Namaste on and off of your mat. If you have any questions or would like to engage in further discussion of Namaste, we look forward to reading your comments below and addressing your thoughts. Namaste.