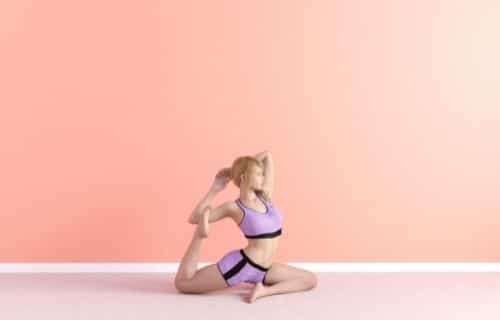 Mermaid pose is known as a seated and backbend posture in yoga. It’s also a deep hip opening pose that focuses on the shape of the pose more than anything. The name mermaid comes from how the pose looks because the back foot comes up and makes the back leg look like a mermaid’s tail. It’s one of the most elegant poses in yoga but it takes a lot of work.

Mermaid pose is part of another pose, pigeon pose. It can only be done after a person has gotten into pigeon and is already stable there, otherwise, the pose won’t be stable, and the person may fall over.

The basics of mermaid pose

Mermaid pose is an extremely difficult pose that focuses on the hips, groin, spine, shoulders, quads, and chest area. All of these areas in the body are either engaged or stretched in this pose. It’s not a pose just thrown into any flow, it’s usually a peak pose because of its difficulty. The body needs to be fully warmed up and prepared for this pose and even then, it won’t come easy. That makes it an advanced pose.

Mermaid pose is known in Sanskrit as Eka Pada Rajakapotasana. This Sanskrit name is also used for one-legged pigeon pose, which is the pose that needs to be achieved before doing mermaid pose. These two poses go together and complement each other although mermaid pose is a harder variation of pigeon pose.

The benefits of practicing mermaid pose

Mermaid pose has so many benefits because it focuses on so many parts of the body. It lengthens the spine and improves posture, as well as spinal flexibility. It opens the hips, stretches them, and increases hip flexibility with continuous practice of the pose. It prepares the body for deeper hip flexibility poses like side splits.

It also stretches the shoulders and improves shoulder mobility because of how the shoulders have to rotate in the pose. At the same time, it’s a heart opener so it lengthens the collarbones and opens the chest area. Mermaid pose requires a stable seat for the person to be able to lean back and grab the back foot. Therefore, it also improves balance and body awareness.

How to do mermaid pose

The biggest mistake that people make when going into mermaid pose is pushing themselves too far. This is an extremely deep backbend and hip opener. It’s an advanced pose that takes a lot of work and pushing yourself into it isn’t safe or comfortable. Going too far in this pose can result in knee and back pain, which isn’t something we want in this pose.

Many people also rush into the pose and end up falling out of it or losing their balance. This pose has a lot of elements to it and to ensure all of them are achieved the person needs to move slowly through them. Moving slowly also ensures that a person is listening to their body and paying attention at that moment instead of rushing into the final pose.

The most important tip for beginners is to move slowly. This is not a beginner-friendly pose, which is not to say that a beginner won’t be able to do it, rather it’ll be a lot of work to get into. Don’t rush into the pose or force the backbend. Rather practice the shape of the pose and similar movements that the pose requires before doing the final pose.

Always warm up the hips, shoulders, and spine before trying the pose out. This pose will be difficult no matter what, but if everything is properly warmed up it’ll be a lot easier. Listen to your body and don’t go further than what is comfortable. Over time it will come but there’s no need to rush into it.

If someone is experiencing any kind of neck, back, spine, hip, groin, or shoulder pain they should avoid this pose. If someone has an injury in any of these areas, then they should not be doing mermaid pose. Similarly, if pain is felt whilst in the pose then the person should back off. Always consult a doctor or physician before going into any physical exercise or movement.

An easier variation of this pose would be to try out one-legged pigeon pose. Get comfortable in this pose and practice balancing with no hands on the floor. This is a good preparatory posture for mermaid pose. If someone wants to try a harder variation, they could try out king pigeon pose, which is an even deeper backbend. This pose requires open shoulders and a very flexible spine to be able to grab the foot with both hands and bend the back to get the foot to touch the back of the head.References: