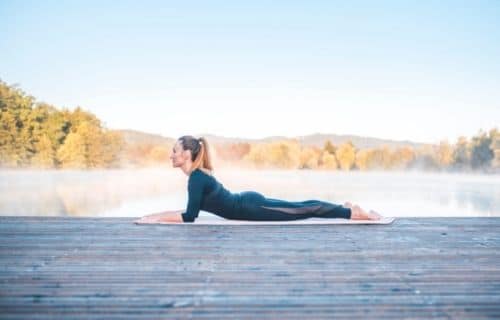 The lions’ breath is also used near the end of practices to let go of any negative energy that was being held onto during the practice. By doing the pose with the breathwork, new and rejuvenating energy is brought in. This energy is useful to starting the day right and clearing the mind.

The basics of lion pose

Lion pose is known as Simhasana in Sanskrit. The Simha in Sanskrit means lion in English. It takes a lot of courage and a level of modesty to do this pose. Many find it embarrassing or difficult to get into. Even though some people struggle with it, it’s still a beginner pose. Anybody can get into the pose but doing it can be mentally challenging.

Lion pose targets the chest, throat, mouth, and surrounding areas of the face. Depending on the way that the individual does the pose, it can also target the hips and the wrists. There are various ways to do the pose, but the full form of the pose targets the mouth, throat, hips, and wrists.

The benefits of practicing lion pose

Lion pose has many benefits which include the release of negative energy. When exhaling in the breathwork, it allows a person to let go of everything that’s holding them down. It helps them relieve tension that they could be holding onto. This exhale also gives a person more energy. The energising breathwork gives confidence and allows the person to feel positive.

How to do lion pose

The pose is easily changeable depending on the person who is practicing it. There aren’t any mistakes that can be made necessarily. Although, many people do struggle with getting into the breathwork. They will often not commit to the breath and end up doing it haphazardly.

In order to receive the benefits of lions’ breath, the breathwork needs to be done properly. There needs to be full commitment to the breath so that the person can truly release whatever tension they’re holding onto. The arch in the lower back is also important in this pose because it helps with giving into the breath.

For those who are trying out lions’ breath and the pose for the first time, it’s recommended to do it when nobody is around. Do it in solitude so that you’re less likely to feel embarrassed or strange when you do it. There is still a strong chance of feeling weird when first doing it, give it a couple of tries to get over the strangeness of it.

When doing it for the first time, try your hardest to do it fully. Don’t hold back or think too much about it. It can also be useful to find a video to instruct you through it. This also helps make it feel more normal.

If someone is injured in the area of their hips, wrists, or lower back then they shouldn’t be doing lion pose. Similarly, if someone is experiencing pain in these areas then they should also avoid the pose. Consult a doctor or physician before doing any yoga pose or physical exercise. Always listen to your body and don’t push past any feeling of pain.

A similar variation of lion pose is wide-legged child’s pose. This pose requires the knees to be spread apart and the big toes touching. The glutes should be placed firmly on the heels and the hands should reach forward. The head is placed down on the mat and the breath should slow down. This is a rejuvenating and calming pose found in yoga. It’s helpful when someone is feeling stressed or anxious.

Another variation of lion pose is frog pose. This is a pose where the knees are again spread wide but so are the feet. The feet are in line with the knees and flexed whilst the upper body stretches forward. This is a deep hip stretch pose that requires a lot of knee padding for support.