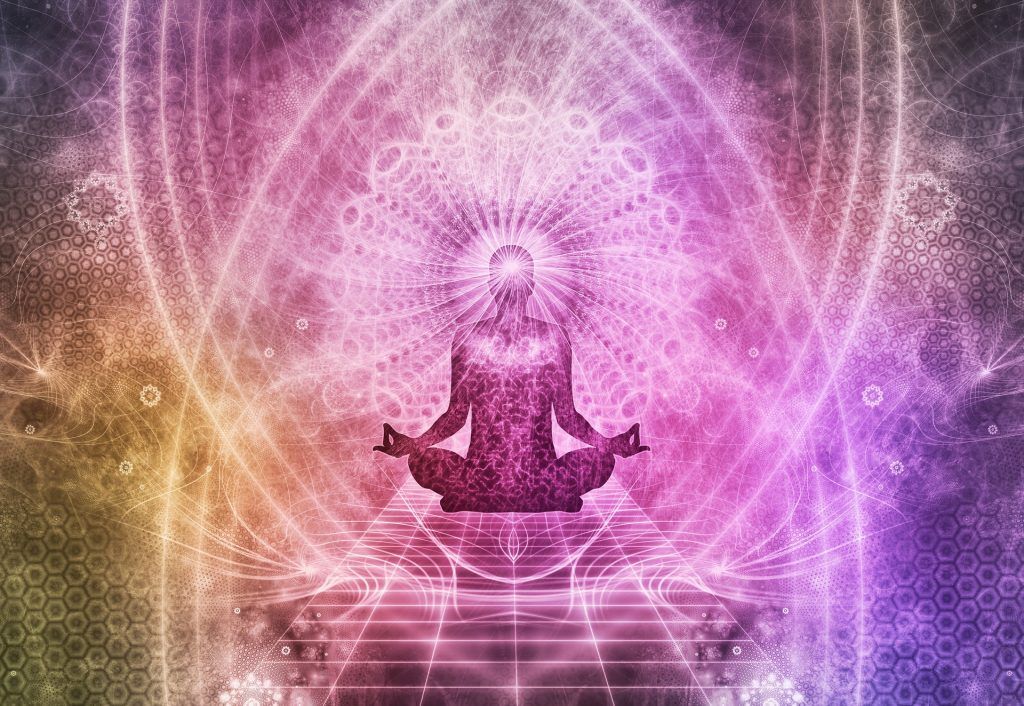 We commonly understand yoga as a set of physical exercises due to the popularity of Hatha Yoga or Vinyasa Flows. This is the predominant method of practicing yoga in most of the continents.

Kundalini yoga doesn’t focus on the yoga asana (poses). It focuses on kriya – a set of spiritual practices to connect to the consciousness.

These spiritual practices are designed to help you realize/experience your consciousness, and improve your ability to be mindful – fully aware of the present moment.

Kundalini Kriya and the 7 Chakras

Kundalini practices are created to “awaken” your awareness or consciousness. Kundalini Yoga is a set of practices (kriya) that can help you achieve this. These practices were derived from an understanding of the 7 chakras and yogic body sciences.

In Sanskrit, chakra means a spinning wheel or disc. This, of course, is the literal translation. Chakras refer to intersections of energy channels in the human body in the yogic sciences.

Intersections? Energy Channels? Let’s back up a bit.

Let’s imagine that you’re looking at a travel map of your country – any country. You’ll notice thousands of roads and highways and major cities or state capitals where these roads converge.

If this was a map of your body, the little roads are what yoga calls nadis – energy pathways. And, the big cities where they converge are the chakras.

Nadis are an important part of the human anatomy that has been described in Ayurveda, the sister science of yoga. As per Ayurveda, the subtle energy of prana (life force) travels through our nadis.

The major centers are divided into 7 zones – chakras. Let us take a brief look at each chakra and its physiological, psychological, and spiritual significance.

The 7 chakras and their significance in Yoga

Root Chakra is positioned at the base of the spine, below the pelvic region. In fact, half the chakra is within you and the other half extends outside you, downward.

This is why is it connected to Prithvi – the earth element.

It is associated with primal instincts that are essential for survival: hunger/thirst, sleep, and sex. In other words, it involves taking care of the most rudimentary needs for our existence as a species.

In the 7-chakra system, it is the very foundation on which your energy system stands.

Your root chakra determines how anchored and safe you feel physiologically and psychologically.

An imbalanced Root Chakra is an unsteady foundation. It manifests in physical and psychological imbalances. Similarly, when your root chakra is strong, you feel confident, anchored, and grounded.

The Sacral chakra is located at the pelvis or sacrum, right under the navel.

Svadhistana is a Sanskrit compound of sva (self) and adisthana (established). It represents emotion and is linked to the water element (Jala), which signifies fluidity.

Sacral chakra’s role is to regulate our emotions, especially guilt and fear. You cannot truly experience life if your consciousness is weighed down by deep-rooted guilt or a fear of death.

So, your sacral chakra determines how well you deal with emotions, urges, and wants of the “lower-self”. Once you open your sacral chakra, you can rise above fear and unleash limitless creativity, and experience self-assurance.

When it is imbalanced, we are driven by these lowly desires and urges. Such people are ruled by fear, lust, and greed. They chase pleasure in physical and sexual acts. These pursuits are often subconscious or unconscious.

In Vedic tradition, the solar plexus chakra is located just above the navel.

The translation of Manipura can be interpreted as a “shining gem” or “city of jewels”. It represents transformation (think trial by fire) and is associated with the color yellow and the fire element.

Ayurveda talks in great detail about the fire element or Agni. It highlights the role of Agni (the seat of Agni is the navel) in metabolism, digestion, and elimination (bowel movement). There are multiple subtypes of fire with unique roles and functions.

The ideas of this are deeply tied to Ayurveda and Vedic understanding, so we’ll refrain from confusing details. In simple words, the Manipura chakra is centered on the solar plexus that plays a vital role in digestion.

Poor digestion leads to toxin build-up in the body. These toxins (ama) block the energy pathways and make us slow and sluggish – physically and emotionally.

A balanced solar plexus chakra leads to good health through perfect digestion, absorption of nutrition, and timely elimination of waste. This enables us to be bright, dynamic, and energetic.

Location:        Heart Level, Towards the Center

The heart chakra is located in the center point of the spine, near the heart but more centered.

Anahata translates as “sound made without two parts touching” but it can also be interpreted as untainted or pure sound.

The scriptures describe this as “…any sound that is produced without two things striking together is the sound of the universe – a vibration of primal energy itself.”

A balanced heart chakra allows you to become detached (objectively involved) in the ups and downs of life.

Now, you can look at the contradictory experiences with a state of objectivity and open-minded attitude instead of being overwhelmed by it.

There is a whole subtype of yoga based on Anahata nadam – the unstruck sound. It is called Nada Yoga (Nada means sound).

The throat chakra is located at the base of your throat, also called the “pit” of your throat. The Sanskrit word Vishudda can be translated to “extraordinarily pure”.

The throat chakra is linked to the color blue and the element Akasha – space or ether.

It represents self-expression and the ability to transform experiences into negative or positive knowledge. It is associated with speech – talking and listening.

This chakra has a lot of importance in the traditions of Yoga. There is a whole science of singing based on stimulating the throat chakra. Most chakras are seen as balanced or imbalanced. However, the throat chakra is depicted as clean or contaminated.

It is believed that a contaminated throat chakra leads a person towards death and decay through negative experiences. People with a clean vishuddha have the power of speech that can move the three worlds and lead them to the realization of their past, present, and future.

In Kundalini, the throat chakra is blocked by regressive feelings like bottled-up guilt. It can be strengthened by pranayama, yoga asana, and the use of locks (bandhas) and gestures (mudras).

Location:        Forehead, between the eyebrows

The third eye is the mind’s eye, as depicted in the many avatars of Gods and Goddesses in the religious traditions of India. It is located in the middle of the eyebrows, on the forehead.

The Ajna symbolizes enlightenment and the third eye is the gateway to an inward journey towards higher consciousness.

A strong third-eye chakra manifests in an egoless state of interconnectedness and wisdom. The weak or imbalanced Ajna chakra is what entangles us in the illusion of Maya – the web that keeps us attached to the cyclic and compulsive nature of physical and material aspects of life.

As per the yogic scriptures, the third eye is awakened upon enlightenment through the medium of meditation.

It allows the person to rise above the physicality of the universe and view it from the vantage point of non-duality or Advaita.

From Buddhism to Taoism to theosophy, you’ll find the same concept expressed in different ways in many spiritual and religious sects across the world.

Element:         None, Beyond Physicality and Sense-perception

Sahasrara is a Sanskrit word that translates to “infinite” or “thousand”. The Crown chakra is situated on the tip of your head, half within you and half-outside you.

The Crown Chakra is the culmination of all spiritual endeavors. It is the subtlest of the seven chakras that symbolizes pure consciousness.

It is depicted using the Brahmrandhra (door to Brahma, the Creator) – a lotus with a thousand petals arranged in 20 layers (50 each).

Kundalini yoga or kriya aims to elevate/empower the crown chakra because it is believed that all the nadis (subtle energy pathways) of the body culminate here.

These Kundalini awakening practices involve asanas like Shirshasana (Headstand) and Vrikshasana (Tree Pose), meditations like Turiya and Om chanting, and the use of mudras and mantras.

Kundalini Yoga and the Seven Chakras:

It was a “secret” practice that was passed on from guru to disciple for generations. This went on for centuries until a mystic called Yogi Bhajan consolidated them in a book in the 20th century.

This made it accessible to people outside the “guru-disciple” chain, especially in the West.

There are many references to Kundalini energy (Shakti) in the ancient Upanishads, a collection of Vedic texts.

If you want to truly understand the origins of Kundalini yoga, you should start with the story of Shiva-Shakti (Lord Shiva and Shakti).