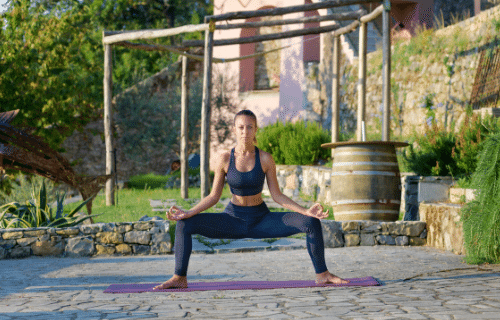 Goddess pose is a very strong pose that is categorised as a standing and hip opening pose in yoga. It’s usually added in the middle or at the end of a yoga flow because a few other poses are used first to build up to the pose. Goddess pose will often be held statically because that is when it strengthens certain muscles the most.

It’s often seen as a gentle pose but because it can be held statically or in a mini flow, it can also be strong. Goddess pose is a big part of the moon salutation flow, which is a gentle flow used to cool and calm the body. This conveys how diverse goddess pose is.

The basics of goddess pose

Goddess pose, which is known as Utkata Konasana in Sanskrit, is a pose that targets the ankles, legs, glutes, hips, chest, and spine. It’s mainly added into yoga flows to open the hips and strengthen the legs but it also works the glutes and opens the chest area.

Depending on how this pose appears in a flow, it can be challenging. However, it can be added to all flows, including beginner-friendly yoga flows because it can be made into a less challenging posture. The less time this pose is held for, the easier it is for anyone practicing it.

The benefits of practicing goddess pose

There are many benefits to practicing goddess pose the biggest being that it opens the hips and chest area. Whilst doing that, it also strengthens the thighs, core, calves, and ankles. It strengthens the spine and helps to improve posture. In some variations of the pose, it also opens the shoulders.

Goddess pose is known for making a person feel positive and strong. It’s got a warrior stance to it and takes some strength to hold, which makes a person feel powerful and boosts their confidence. It’s a useful pose to do when trying to build strength and self-esteem.

How to do goddess pose

The biggest mistake that people make when doing goddess pose is that they don’t adjust their ankles. The knees need to stay in the same direction as the toes otherwise they knock in slightly and it can hurt. This variation also loses the strength and integrity of the pose.

Another mistake that people make when doing this pose is that they arch their lower back a lot. This isn’t good for the lower back, especially if the pose is being held for long periods. Engaging the core can help to keep the lower back slightly straighter and will help to strengthen the core.

Many beginner practitioners think that their legs have to be extremely wide apart to be doing the pose right. This isn’t true, the legs can be as close in together as needed. Starting with a shorter stance is beneficial when starting out so that a person can safely find their edge and not push themselves too far.

There’s also no need to squat down so much. Start higher up and slowly work your way further down until you feel some sensation. Make sure to listen to your body so that you know how far you can go and never go past the point of pain. Staying in goddess pose for shorter amounts of time is another good tip for building the strength to hold it for longer.

If someone has an injury in the area of their back, spine, hips, glutes, thighs, ankles, and shin then they should not be doing this pose. Similarly, if someone is experiencing any kind of pain in these areas then they should avoid the pose. Always consult a doctor or physician before doing a pose or partaking in any physical exercise. Listen to your body when practicing and never push past pain, always back off if it gets sore and try a gentler pose.

A variation of goddess squat is Malasana, which is also known as yogi squat. This variation is done lower to the ground and requires less strength in the thighs and the core. It’s also a deep hip opener but not one that requires strength to hold the pose. Yogi squat requires a straight spine, which improves spinal health and posture.

There are variations of goddess pose where the legs stay the same but the arms change. Sometimes the hands can be interlaced behind the back, this variation opens the chest area more. Other variations have the arm interlaced and stretched up towards the ceiling, which stretches the side body. Another arm variation has the hands at the heart centre, which encourages the person to go more inward and focus on their breath. This variation is the easiest of all the arm variations because it takes no strength.