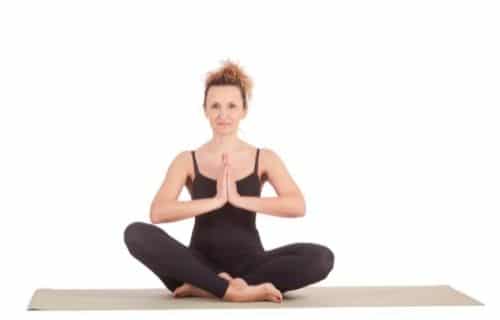 Fire log pose is a seated and hip opening pose that’s found in a yoga class. It’s known to be a gentle pose, which is often used at the beginning or near the end of the class. This is because it’s a pose that doesn’t require a lot of effort. The pose is commonly used to ease into a yoga flow and set the tone of a class. If fire log pose is used at the beginning of the class, it often means that the class will be centred around hip-opening poses.

For the pose to be done correctly a lot of focus on alignment is needed. The alignment in this pose is also the reason it’s known as fire log pose. The stacking of the knees and joints in this pose makes it look like a pile of fire logs. The shape of the pose is what ensures that a deep stretch is felt in the hips.

Fire log pose, which is known as Agnistambhasana in Sanskrit, is a pose focused on stretching. There is no strength involved in fire log pose and the stretching happens in the areas of the hips and groin. Even though the pose doesn’t involve any strength, it is still a deep stretching pose.

The pose is found in all levels of yoga flows, which makes it a beginner friendly pose. It is, however, also used in advanced classes. This is because it still has the ability to stretch the hips of those who are already flexible. Fire log pose allows the hips to open up more, whether the person stretching is flexible or not.

Fire log pose has many benefits, which include the opening of the hips. There are many poses in yoga that stretch and open the hip area, but fire log pose goes deeper into the hips. This increases the flexibility in the hips and groin, which prepares the body for poses like the splits. Fire log pose often requires a straight spine and the practice of it improves a person’s posture.

It’s a seated and low to the ground pose. This makes it easy to do during a meditation and allows more focus on the breath. Fire log pose is a calming pose that eases anxiety and soothes the nervous system. This makes it an ideal pose to practice in any yoga flow.

One of the biggest mistakes people make when trying to do fire log pose is that they push themselves into the pose too much. Fire log pose is a deep stretch and often people struggle with it and end up trying to push the top legs knee down towards the bottom legs foot. This can cause pain and won’t help the stretch.

Another mistake that people make when trying to do the pose is that they round their back and slouch slightly. This pose requires a straight and lengthened spine throughout the stretch and not only when going into the pose. Lifting up and out of the lower back will enhance the stretch in the hips and improve posture.

When first trying to do fire log pose, it can be helpful to place a blanket under the body. The blanket can be folded and placed under the glutes, which makes it easier to sit tall in the pose and not slouch. It also makes the pose a lot more comfortable for the person doing it for the first time.

Similarly, pillows can also be used for the first time. It’s helpful to place a pillow in between the top legs knee and bottom legs foot. This makes the stretch gentler and a lot easier to hold for long periods of time. Remembering to break down the pose step by step and focusing on the breath will also help anyone trying fire log pose for the first time.

If someone is injured in the area of their ankles, shins, hips, and/or groin they shouldn’t be doing this pose. If someone is experiencing pain in any of those mentioned areas, then they should also avoid the pose. Consult a doctor or physician before doing any yoga pose or physical exercise. Listen to your body and if something hurts, don’t push past it.