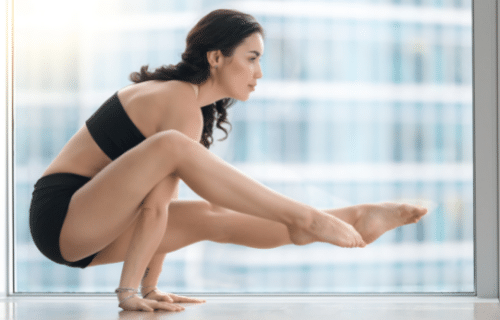 Elephant trunk pose is an interestingly shaped pose and requires not only arm strength but also hip flexibility to get into it. It’s named elephant trunk pose because of the shape of the pose. The one leg lifting up looks like an elephant’s trunk sticking out. This pose has also been known to be called one leg over arm pose.

The basics of elephant trunk pose

Elephant’s trunk pose is known as Eka Hasta Bhujasana in Sanskrit, which translates to one hand trunk pose. This pose targets the wrists, arms, hips, and hamstrings. The hips and hamstrings especially need to be warmed up to be able to get into this pose without any struggle.

Although elephant trunk pose requires quite a bit of flexibility to get into, it’s not one of the hardest arm balances. As far as arm balances go, it’s relatively easy. It’s still an arm balance though, which requires some arm strength. This makes it an advanced level pose, especially since the pose that usually follows it is extremely difficult.

There are many benefits to practicing elephant trunk pose, which includes strengthening the arms and wrists. The wrist goes into a lot of extension in arm balances and therefore needs to be properly warmed up beforehand. Continuous practice of arm balances strengthens the wrist. The arms are also strengthened over time, which is useful for building strength for harder arm balances and inversions.

Elephant trunk pose opens the hips and stretches the hamstrings. This helps to improve the flexibility of the hips and hamstrings. It also engages and strengthens the core muscles. This pose incites confidence in those who practice it. This confidence then helps a person to try and practice other arm balances and get better at them.

How to do elephant trunk pose

One of the biggest mistakes that people make when trying elephant’s trunk pose is that they try to push their leg far back to get over the shoulder. There is no need to push into the pose, especially if the leg doesn’t naturally go there. The leg can be placed anywhere on the arm, as long as it’s as high up as it can go. The pose still works with the leg a bit lower down.

Another thing that people forget to do in this pose is to engage areas like the thighs, core, and even the fingers. Engaging these areas and gripping into the fingertips will help the body to lift off easier. It’s a stronger pose when these areas are engaged and used efficiently.

For those who are trying elephant’s trunk pose for the first time, try practicing the shape of the pose first. The shape can be done lying down and seated without pushing into the hands. Do light drills of attempting to pick the body up and put it back down to build strength for the pose.

Practicing and accomplishing other arm balances like crow first would also help to understand the basics of arm balances. It’s a lot easier to get other arm balances once the easier ones are done first. Beginners should also work on their hip and hamstring flexibility a lot before trying the pose out.

If anyone is injured in their leg, knee, hip, hamstring, arm, or wrist then they shouldn’t be doing elephant trunk pose. If they are experiencing pain in these areas, then they should also avoid the pose and try something gentler. Listen to your body and if there is ever any pain then slowly back off from the pose. Never push past pain. Consult a doctor or physician before trying any yoga pose out or going into any sort of physical exercise.

The harder and more advanced version of this pose is eight angle pose. For this pose, you go from elephant trunk pose and bind the feet together before rocking forward so that the legs go to the side. This pose takes a lot of strength and balance. It’s also one of the scarier arm balances as a person has to almost shoot themselves forward to get into it. Easier arm balances to try would be crow pose and side crow. These would help to build the foundations of elephant trunk pose and any other arm balance.