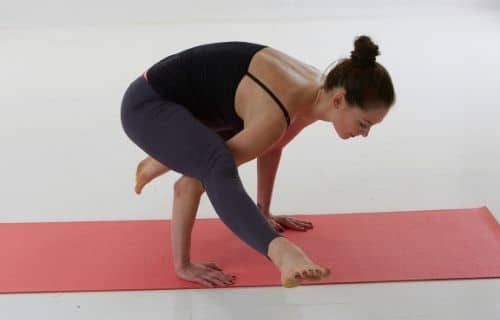 Crane pose is an arm balancing pose that’s found in yoga. Many people confused crane pose with a pose similar to it known as crow pose. However, these two poses are very different even though they look almost exactly the same. Crane pose is a much harder variation of crow pose.

Crow pose is known to be difficult but it’s also a beginner arm balance. This means that it’s one of the first arm balances taught to students and it helps them to build their way into other arm balances. Crane isn’t one of those arm balances that will be taught in the beginning of learning arm balances because it takes slightly more skill and strength.

The basics of crane pose

The Sanskrit name of crane pose is known as Bakasana. This pose is targeted at keeping balance by engaging the core and the arms. It also targets the wrists because they go into a lot of flexion in this pose. These are the same targets as crow pose and almost everything is the same except in crane pose the arms are completely straight in the balance instead of being bent.

This means there is no shelf to rest the legs on and a lot of strength and balance is needed to keep the body in the air. This is extremely challenging, especially for those who have only just started testing out arm balances. Crane pose is known as an advanced level pose that should only be tried after quite a few other arm balances have been tackled first.

The benefits of practicing crane pose

There are many benefits to practicing crane pose the two biggest being that it strengthens the body and improves the balance of a person. Many people don’t have the best balance because they don’t do anything to specifically improve on it. Practicing arm balances is one of the best ways to improve balance and test your confidence.

Once an arm balance like crane pose is achieved, it makes a person confident in themselves and their abilities. Crane pose also strengthens the wrists, arms, shoulders, and core muscles. It’s a pose that increases body awareness, which will improve a person’s overall yoga practice.

How to do crane pose

The biggest mistake that people make when trying to do crane pose is that their gaze isn’t far forward enough. People always want to look at their feet or close to their body, but this causes them to fall. Having the gaze further forward on something that isn’t moving helps to keep the body balanced and prevents it from falling over.

Another mistake that people make when trying crane pose is not getting their knees high enough into the armpits. The pose will be very difficult to hold if the knees are lower down. More strength is needed in that variation, and it often causes people to not lift off into the pose.

Another tip for beginners is to take a lot of breaks. Don’t tire yourself out or work too hard otherwise the arms and the rest of the body will get too tired to hold the pose. Do a child’s pose in between practicing the pose to conserve energy and strength. Don’t warm up too much before trying the pose because this will also tire the body out.

if someone is injured in their wrists, knees, shoulders, or arms then they should avoid this pose. Similarly, if someone experiences any kind of pain in these areas then they shouldn’t do the pose. Consult a doctor or physician before doing any physical exercise or trying out any yoga pose. Always listen to your body and never push past any pain.

The most common variation of this pose is crow pose. This variation is a lot easier and doesn’t require as much strength. In crow pose, the arms stay bent and are used as a shelf to hold the legs. This makes it easier to hold the balance. Another variation is one-legged crow pose, which is also difficult. This variation requires more leaning forward from the person and can be incredibly scary. One-legged crow shouldn’t be tried until the crow pose is held comfortably first.